The Nike Dunk Lows have regained a lot of interest in the past year, and if you’re a streetwear lover or sneakerhead you probably have a pair (or three) of the classic SB’s. So, it is no surprise that Nike have released another collection which includes three pairs of the Dunk Lows. Next week Nike are releasing the second pair of sneakers from their Team Tones collection. They will be available 12th June, where you can get your hands on the Nike Dunk Low ‘University Red’ sneakers for just £85.

The Dunk Low is one of the most popular Nike silhouettes of the season. After recent popular collaborations including the Ben & Jerry’s ‘Chunky Dunky’s’ which sold out almost immediately, and the Travis Scott ‘Cactus Jack’ sneakers, the Nike Dunk Low silhouette is making a big comeback. People are loving the low sneakers at the moment, and with many more Dunk Low collabs and colourways scheduled for the rest of the year, we know they are a sneaker that will be sticking around for some time.

The Team Tones collection is continuing to build on this success of the popularity of the Nike Dunk Lows, with three retro-style colours which are perfect for the summertime. Coming in either the ‘Brazil’ green and yellow, ‘University’ red and white or the ‘Champ’ orange and navy, whichever pair you opt for they are sure to brighten up any outfit.

The three sneakers draw inspiration from Nike’s archives, with each release slightly resembling a previously released Nike sneaker from an older collection. Nike kicked off their Team Tones pack in May with the release of the Brazil colourway. This particular colouring first debuted back in 2001, and the updated relaunch of it was a major hit. The second part of the pack comes with the ‘University Red’ colourway which is reminiscent to the 2005 Dunk Low ‘St. Johns’. The final pair ‘Champ Colours’ which looks like a reversed version of the 2004 ‘Syracuse’ won’t be released until the end of the month. 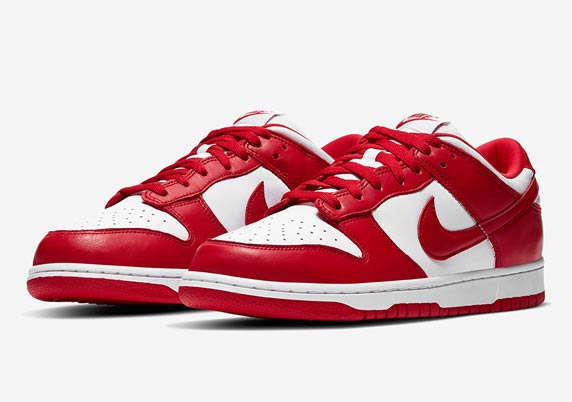 The bold and classic colour blocking style of the pack has been massively popular with sneakerheads.  The ‘University Red’ colourway is arguably the most wearable. With white leather quarters, toeboxes and collars, which are then overlaid with red mudguards. Finished off with red swooshes, outsoles, and laces the clean red and white colour blocking works well together and is a classic combination. The sneakers are finished off with traditional Nike branding on the tongue. 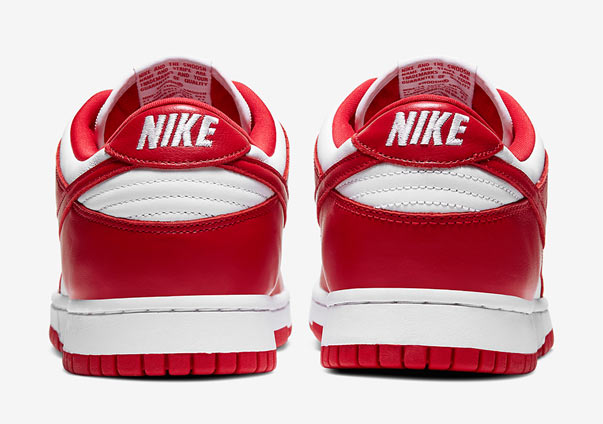 It is rumoured that the final colourway in the Team Tones pack, “Champ Colours” will be released June 24th. These sneakers are slightly more unique as they come in a vibrant orange and dark navy. So, it’s time to decide if you prefer the ‘Champ Colours’ or the ‘University Red’ colourway, as the latter are expected to sell out shortly after release. You can cop them here at Nike SNKRS.

Want more content? Check out our ‘Release News and Blogs’ page where you can keep up to date with all the latest goings on to keep you entertained during the current lock down period.