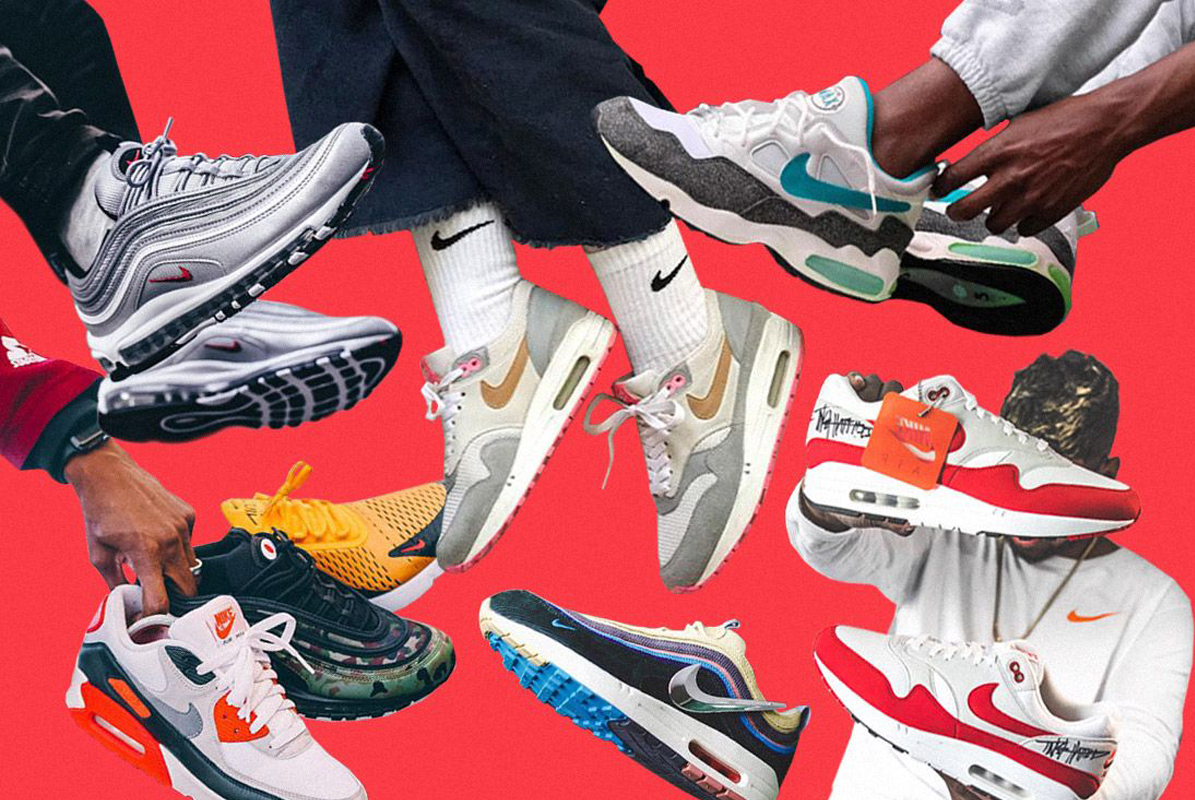 Nike celebrates ‘Air Max Day’ on March 26th. Every year they celebrate the innovation and technology behind the beloved shoe. This week Nike have released images of the brand-new Air Max that will be on sale March 26th.

Air Max Day was introduced in 2014 to celebrate the first Air Max 1 released in 1987. Tinker Hatfield designed the streamlined running shoe. He applied his architectural background to the shoe design, and he cut a window into the midsole. The small window means that the air is visible – hence the name.

3 years later Tinker Hatfield wanted to go even bigger. So, he designed the Air Max 90 with a bigger air pouch. Nike released another 5 pairs of Air Max between 1990 and 1995, each one exposing more of the air pouch. Tinker Hatfield took inspiration from various things around him. For example, the design for the Nike Air Max 93 came from a plastic milk jug. Then in 1995 the Air Max 95’s were released, taking inspiration from the earth’s layers, this shoe had six windows to show the air.

Following the 95 was the Nike Air Racer Max, Air Max 96 and Air Max 97. The Air Max 97 was ahead of its time and looked very futuristic. Christian Tresser, the designer behind the 97’s said that the layered uppers were representative of ripples of water in a pond. The following year Nike released the Air Max Plus. For the plus they split the air unit into different sections, they called the technology ‘Tuned Air’. The bright blue gradient colourway was inspired by Florida’s sunsets.

Between 1998 and 2006 another 3 Air Max’s were released. In 2006 they debuted the Air Max 360. For this trainer, Nike achieved a no foam design – Max Air cushioning. It made sense to create a trainer that was cushioned entirely by air. And to pay homage to the first Air Max, the colourway was a similar red and white as the Air Max 1 released in 1987. Next came the Flyknit and the Vapormax. The Flyknit released in 2014 was a flexible, comfortable shoe constructed with a lightweight fly knit. The Vapormax, in 2015, only had a thin film between your foot and the cushion, what it resulted in is the feeling of walking on air.

In the 4 years since the Vapormax was released Nike have bought out 5 more pairs of Air Max with the most recent being the Air Max 2090 released in 2020. As Nike celebrated 30 years of the Air Max 90, they took inspiration from the iconic silhouette and designed the 2090 which looks almost futuristic. The air pouch was made bigger by 200% and the colourway was inspired by Italian sports cars.

For a sneak peak of what’s to come in 2021 make sure to read about the street inspired gel pack!  Nike have been pulling out all the stops to celebrate Air Max Day over the past few years so we’re excited to see what they do this year. For the first Air Max Day in 2014 Nike ‘reimagined’ the Air Max 1. The trainer was given a brighter and bolder colourway with ‘3.26’ printed on the tongue to mark the date. Then 2 years later in 2016 Air Max Day became a global event. Nike held an event – Nike Air Con – in various cities for people to get together to celebrate the sneakers. For the new Air Max that year, Nike released 3 collaborations with Japanese artist Hiroshi Fujiwara, Nike designer Tinker Hatfield and Nike chairman Mark Parker. The ‘HTM’ collection were loved by sneakerheads.

2017 was a big year for Air Max Day. Not only were the Vapormax’s sent into SPACE but seven collectables dropped. Classic colourways were being seen once again as a way to pay homage to the old favourites. Travis Scott also threw a party to celebrate the day! And for Air Max Day in 2019, Nike promoted their ‘Give Fresh Air’ campaign to help the community. They then released trainers throughout the year celebrating various cultures and communities. They released the Nike Air Max 180 BLN which celebrated Berlin’s clubbing culture.