With just over a month since the release of his highly successful sophomore album “My Turn” Lil Baby releases a new single called “All In”. The single came alongside an announcement stating that 6 new songs will be added to the tracklist of his forthcoming project “My Turn” (Deluxe) set to release on May 1st, so “All In” is exactly how the young rapper is moving.

The artist has has a turbulent history with the law as he was charged with possession and intent to sell in early 2012 resulting in him eventually accepting a 2 year plea deal following an alteration between him and another prisoner over racial comments. In 2014 he was arrested for possession with intent to sell amongst other things which resulted in him being incarcerated for the best part of two years.

Dominique Armani Jones or better known by his stage name Lil Baby first appeared on the scene in 2017 with his mixtape called “Perfect Timing” and his first hit record “Freestyle” both leaving an imprint on both fans and critics alike. This comes as no surprise considering he emerged from Atlanta, Georgia where the musical talent is ample, and is signed under Quality Control music, a record label based in Atlanta and committed to showcasing its quintessential trap and rap sounds. The label helped catapult the careers of superstars like Cardi B, Migos, Stefflon Don and City girls alike giving the, at the time rookie Lil Baby fruitful grounds on which to begin his journey.

It wasn’t until the release of his first studio album “Harder Than Ever” that he started making waves with help from a celebrity studded list of features including the likes of Drake, Lil Uzi Vert and Gunna just to name a few. The album was certified RIIA platinum and included songs like “Yes Indeed” which peaked at 6 on the Billboard hot 100, the mammoth success of his debut album set the tone for all his forthcoming music which remained on the same standard. His latest album “My Turn” became his first number one album and included features from Future, Gunna, Lil Wayne and Young Thug, with 14 tracks debuting on the charts he tied Prince and Paul McCartney for the number of Billboard Hot 100 Entries.

In his latest release the single “All In” talks about his struggles leading up to his current success which is exemplified in the music video. Filmed while in quarantine, Lil Baby is seen cleaning his extensive jewellery collection which includes the iconic diamond encrusted cuban chains, over a stove and hanging out in his garage showing off his custom 2020 Rolls Royce Cullinan. Although simple the video still packs a huge impact and gets his message across loud and clear “ They know I came up, but I came back through the slums with Diddy” he raps. The video is currently sitting at 5.3 million views on youtube just 5 days after its release, one of the most identifiable items the rapper is wearing in the video is the Off-White spider arrows hoodie available for purchase here: 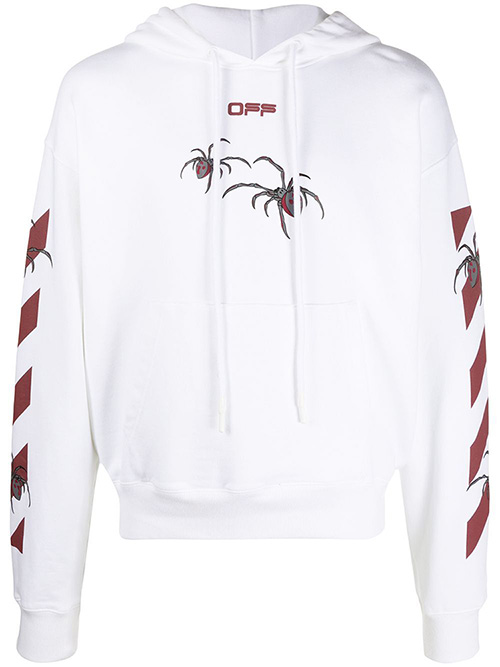 Until the release of “My Turn” (Deluxe) stream lil baby’s “My turn” on all streaming platforms and let him walk you through a tour of how he’s doing in isolation with “All In” :