Back in December in Miami, the Dior X Jordan collaboration was revealed at Dior’s Pre-Fall show. And ever since then, they have been on the minds of fashion fans and sneakerheads. The sneakers are a take on the Air Jordan 1’s that you are probably familiar with, only this time they are branded with the Dior logo. Unfortunately, the launch is just another thing to suffer due to Covid-19 with the release date being postponed. Although, the uncertainty of the launch hasn’t made these sneakers any less acclaimed.

There has been an increased hype around the Air Dior’s as they were first seen on Travis Scott. He was one of the first people to wear the sneakers at the Dior show and he has been promoting them on his Instagram. Other celebrities including Kylie Jenner and DJ Khaled have also been seen sporting the unreleased sneaker.

The sneakers are not the only thing to come from the collaboration. Alongside the high and low iterations of the shoe a clothing capsule will also drop. This includes a sweater, a shirt, a V-neck vest, accessories such as a clutch bag and socks, and as basketball is the main influence for the Jordan brand the collection also includes jersey shorts, and track pants.

As previously mentioned, the sneakers will be released in both the high and low iteration. They are made with white and Dior grey leather, and this simple colourway lends itself to multiple styling opportunities. They are made entirely in Italy and have hand-painted edges. The Nike Swoosh is filled with Dior’s recognisable logo motif that Kim Jones introduced to Dior in 2018. The familiar Jordan wings logo has been replaced with ‘Air Dior’ branding which can also be found on other items from the collection. 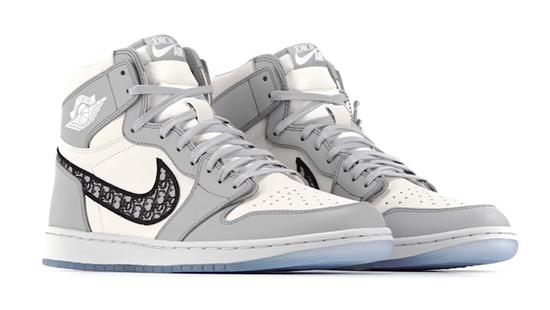 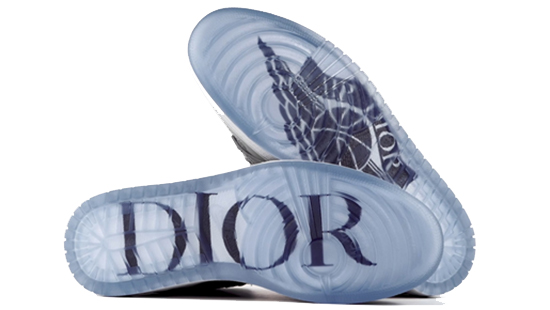 This is one of the rare occasions that a high-end brand collaborates with a premium brand, and it was all Kim Jones’ idea. The creative director of Dior Homme wanted to collaborate with the Jordan brand because he loves ‘mixing together different worlds, different ideas.’ He said “I chose to collaborate with the Jordan brand because Christian Dior collaborated with the best American brands of his era. (The brands) are both emblematic of absolute excellence in their fields”. This was their first collaboration together and it is just another example that we are seeing of the blend with high end streetwear and luxury fashion. Jones has explained that he took inspiration from the Art Deco movement and referenced the 1960’s travel scene. The capsule collection commemorates the first Dior men’s show in the Us and also the 35th anniversary of the Air Jordan 1. We can’t think of a better way to pay respect to both these iconic brands than with this collaboration.

The iconic sneakers will only be available at select Dior stores and as of yet there is no confirmed price however they are rumoured to be around the £2000 mark. If that turns out to be true, then these will be one of the most expensive Air Jordan’s sold. Because the original launch got pushed back and in light of the current situation there has been no word of a release date yet; reportedly there will only be 8500 pairs up for sale so be sure to keep your eyes on Dior and Nike’s websites so that you get your hands on them!