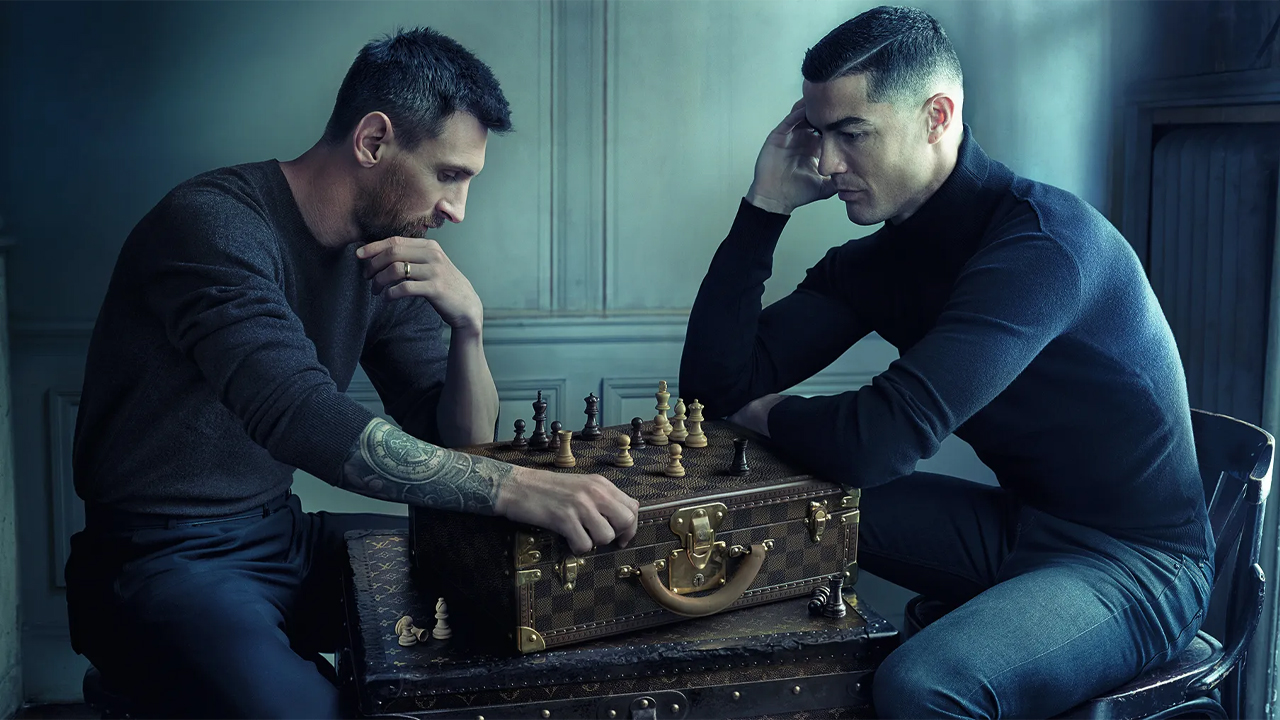 During the weekend, Paris based Louis Vuitton released a new campaign featuring the two greatest football stars of this generation – Lionel Messi and Cristiana Ronaldo – and the internet went crazy.

Titled “Victory is a State of Mind,” the new campaign was unveiled just in time for the 2022 FIFA World Cup Qatar, where both players will be representing their home nations of Argentina and Portugal – most likely for both players last World Cup ever.

The new campaign features the two stars engaged in a game of chess, with the chess board resting on a Louis Vuitton Damier attaché case. You could argue that football holds a lot of similarities to the strategic game of chess.

The campaign focuses on Louis Vuitton‘s longstanding reputation for its travel trunk craftmanship.

The luxury fashion label has a rich history with the FIFA World Cup and it’s tradition for the trophy to arrive in Louis Vuitton luggage. During the opening ceremony of the 2022 tournament, the FIFA trophy was presented and arrived in a custom Louis Vuitton Case.

This isn’t the first time Louis Vuitton has shown respect towards football heritage. It was only in 2010 when the fashion label launched a campaign featuring Pele, Zidane, and the late Maradona.

As you can imagine, football fans around the world were absolutely buzzing to witness a never-before-seen reunion of two of the sports’ greatest ever rivals (respectfully).

Take a look below to check out some of the reactions from fans on Twitter:

Louis Vuitton to bring Ronaldo & Messi together in a single photo, they could have coughed out over $1B.

Louis Vuitton really did ads with the 5 GOATS of the Sport… pic.twitter.com/ombB1EvKqP

That Ronaldo & Messi picture for Louis Vuitton is the hardest pic to ever be uploaded on instagram.

Louis Vuitton will be remembered as the brand that brought together Messi and Ronaldo, off the pitch. pic.twitter.com/6Jf9iMzjYt

It’s the smartest football PR decision any brand has ever made.

Imagine having Messi and Ronaldo fans as a collective pumping your product: you win footballs

Louis Vuitton has helped deliver the most iconic ‘out-of-pitch’ picture in football history.

Football will never see anything like these two again. What a picture 🔥🥵 pic.twitter.com/bMT7aT9Y54