Unless you’ve been living under a rock, you’ve probably come across the name Lebron James at some point. Whether its through the deep realms of Vine (RIP) during the pre Tik Tok era, or through your genuine love of sports (in particular, basketball)… Lebron James is one of the hottest names to come around when it comes to not only competing on the hardwood, but sneakers (and memes) too.

Lebron James is undoubtedly one of the biggest basketball stars in NBA history. His legacy began after skipping college to join the Cleveland Cavaliers back in 2003, since, he has played for a variety of NBA leading teams including the Miami Heat and his current team, the Los Angeles Lakers, which he joined just two years ago, in 2018. Nicknamed ‘King James’, the basketball player was marked as the youngest player to accumulate 30,000 career points in 2018. This achievement meant that James became the seventh player within NBA history to accomplish such a breakthrough within the sport. Just a year later, in 2019, James surpassed fellow basketball superstar Michael Jordan’s points tally of 32,292, which put him in fourth position of the list. In 2020, James did it again and overtook the one and only Kobe Bryant on the list, with an astonishing total of 33,643 points. 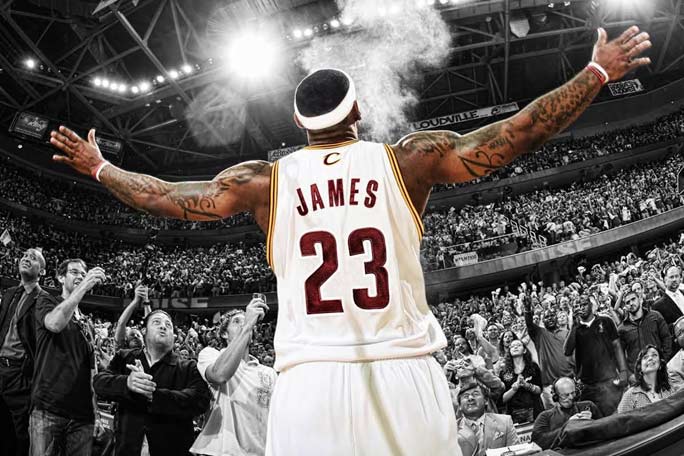 Nike jumped at the chance to sign Lebron James his very own deal at the beginning of the career. Since the signing, the collaboration has seen a huge range of releases of James’ very own silhouettes, including the Nike Lebron 15 and the Nike Lebron 8. Since the rise of the sneaker culture movement, these designs have boomed on the resale market, with some fetching over £4,000 on the authentic resale platform, Stock-X. The eclectic mix of design elements and colours make the Lebron James collaborations stand out when it comes to trainers, often consisting of bold graphic prints and unusual shapes.

Nike have recently unveiled their latest collaborative project with the NBA star. The new Nike ‘Lebron 17 Graffiti’ takes a lot of inspiration from the ‘Lebron IV’. “I think the IVs were before their time,” says James. “The full-length Zoom unit, the Foamposite — that silhouette was crazy. It looked so different from the earlier three shoes in the line and wearing them right before that title run in 2007 made them that much more memorable.” 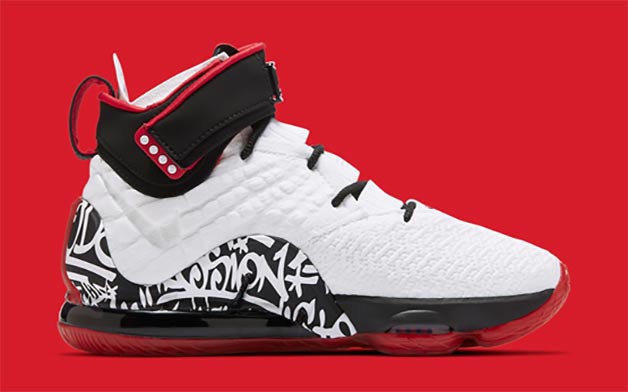 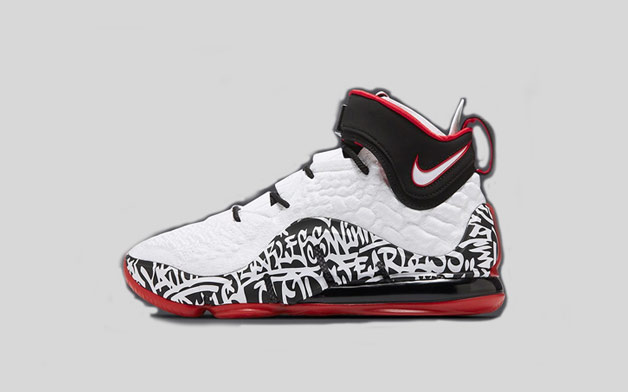 The Nike ‘Lebron 17 Graffiti’ features a white, textured knitposite base upper, which is supported with a mudguard that wears a bold graffiti style script pattern in contrasting black and white. The black midsole continues around the front of the she and the toe box, which is complimented by a vivid red which constructs the outsole. The black ankle strap adds extra security and adjustment to the fit of the shoe, which is emblazoned with black and red Nike Swoosh branding. At the front of the strap, there is a distinctive L23 motif jewel, which sits in front of the tongue. The iconic Lion logo tag decorates the black mesh tongue, contrasting with its white base layer and red piping. The design is finished with a black and red pull tab which sits on the heel for ease of movement. 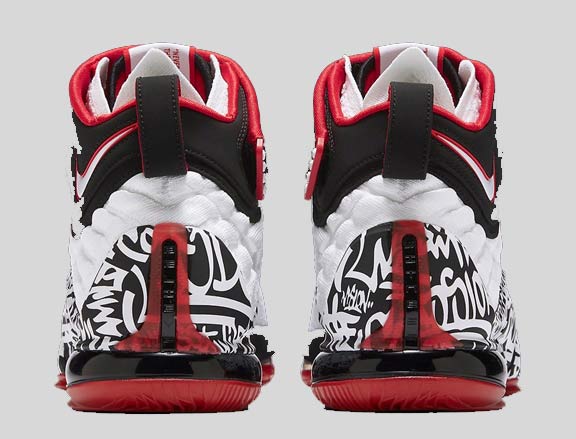 The drop date for the Nike ‘Lebron Graffiti 17’ is 5th June. The pair will be available on the Nike SNKRS app, Nike online and at select retailers – this will be a hot collectors pair and will be sure to sell out fast due to the popularity of previous Lebron releases. Unfortunately, there is not yet a confirmed retail price for the shoe.

For more articles like this one, and to catch up on all the latest goings on within menswear and music, visit our ‘Release News and Blogs’ page.