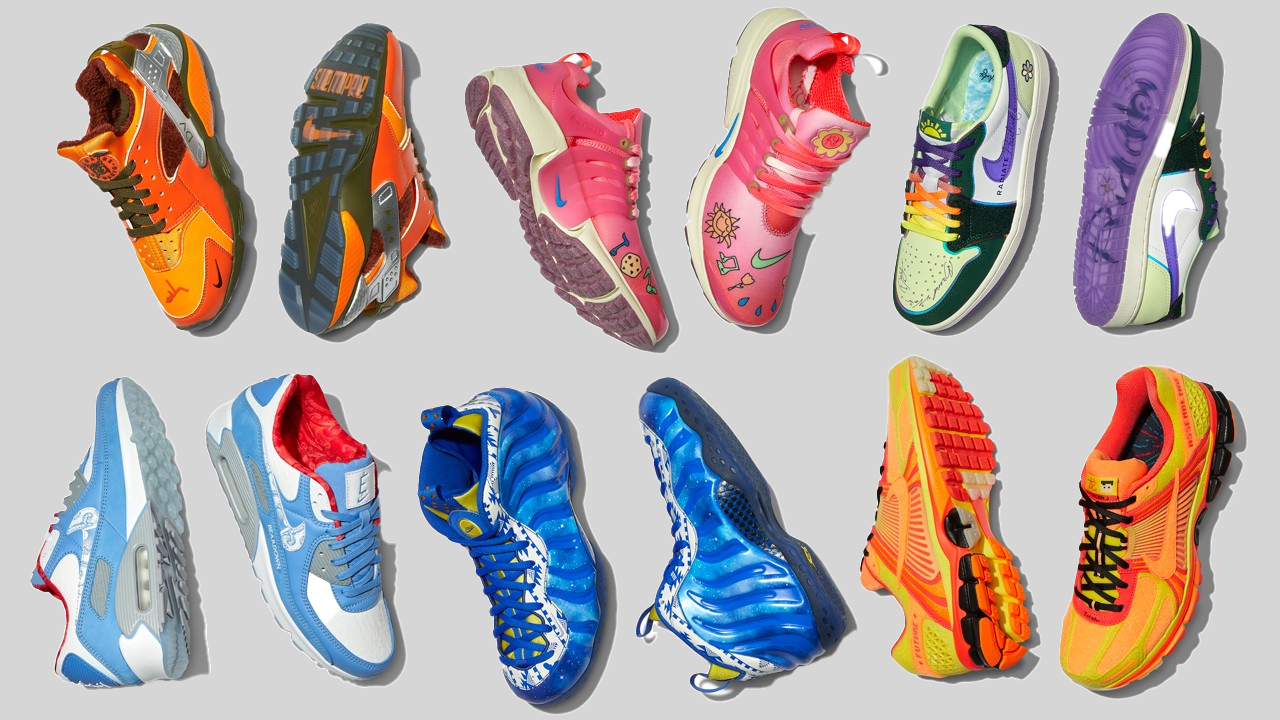 Beginning in 2004, Nike and OHSU Doernbecher Children’s Hospital in Portland, US, has worked together and raised nearly $31 million USD for the hospital. As part of the ongoing initiative, every year the Doernbecher Freestyle program bring together a small group of OHSU Doernbecher patients to design their own Nike trainers.

The patients are assisted by Nike‘s Employee Design team and the collections even feature apparel and accessories to match the trainers. The trainers are later auctioned off to charity, with a small number of pairs making their way to a public release.

For the 18th rendition of the program, the Doernbecher Freestyle XVIII Collection for 2023 is being showcased at the Portland Art Museum as the auction is set to take place in-person for the first time in three years.

Six young designers were called upon to design the 2023 collections. They all injected their personal inspiration into the designs and you can take a closer look at the designers and their creations below.

Inspired by his favourite things in life such as oranges, creating animations on his YouTube channel and his long-haired plush toy – 13-year-old Dario has reworked the Nike Air Huarache to resemble what he loves most. The “Siempre Fuerte” text on the outsole of the trainers translates to “Always Strong,” an approach Dario has stuck to throughout his battle with juvenile myelomonocytic leukemia.

12-year-old Kylee Young has strongly incorporated her favourite colour pink into her take on the Nike Air Presto. The colourful trainers showcase everything Kylee enjoys in life, such as flowers, springtime and most of all, cookies. A hemolytic uremic syndrome survivor, Kylee’s positivity shines bright through her creations.

Full of bright energy, Emerson drew his inspiration for his take on the Nike Air Max 90 from his passion for video games, sports and his ambitions to becoming an investor. As a Arizona Wildcats fan, Emerson added the “Bear Down” phase to his trainers as a shout out to his team. Battling inflammatory bowel disease, Emerson continues to fight every day, looking up to his family as his heroes.

Along with a sweatshirt and hat, Riddhi Mahajan recreated the Air Jordan 1 Low while injecting it with her colourful positive energy. Diagnosed with cystic fibrosis, Riddhi’s “Brand New Day” phrase printed on her trainers, has allowed her to maintain a positive mindset. A black belt in Tae Kwon Do, Riddhi’s Air Jordan 1 Low’s are a colourful remix we’d love to see on the shop shelves.

10-year-old Jaren Heacock has redesigned the Nike Zoom Vomero 5, along with a hoodie and backpack in matching designs. Jaren has many ambitions, such as to be a creator, coder and robot builder. Features in his trainers include interchangeable patches and a salute to his Chinese heritage with dragon-inspired elements. Diagnosed with a cleft palate, Jaren’s energy and ambitions keep his mind busy on designing the future.

Rounding out the collection, 11-year-old Coley Miller looked to her favourite sport of basketball for inspiration for her Nike Air Foamposite One, alongside her tracksuit bottoms and backpack. Featured upon the retro hoop shoe, Coley wanted to include a basket weave graphic that showcases a quail plume and the Klamath mountains. The stargazing-themed prints are inspired by Coley’s mother, who donated a kidney when Coley underwent a kidney transplant.

The in-person auction is set to take place soon and the $31 million USD already raised from Nike’s partnership with OHSU Doernbecher Children’s Hospital is expected to increase a considerable amount.

The entire Doernbecher Freestyle XVIII collection is set to become available to the public via Nike and from selected retailers in early 2023.

Stay locked in at The Hoxton Trend for more information and follow the links to join our community and discover the top discounts & sales available.