Since his rise on the fashion scene with the mammoth success of his own Milan based streetwear label Off-White, Virgil Abloh, the architect, turned entrepreneur, turned DJ turned fashion designer has been turning heads one season at a time and is the name on everyones lips when discussing menswear fashion. The multi-faceted mogul began his career in the fashion industry back in 2009 under an internship with Fendi alongside rapper Kanye West , where the two formed a fruitful relationship which would in turn help fund the launch of Off-White.

On march 25th 2018, Abloh was named the creative director of Louis Vuitton menswear ready to wear following the departure of Kim Jones leaving him with large shoes to fill. His new title however was much more than just a mere promotion, the young designer is the first African American to be named artistic director of the French heritage house making this a monumental moment in black history and culture. Alongside Olivier Roustieng at Balmain and Ozwald Boateng at Givenchy (2003-2007) the list of black designers at the top of European luxury businesses remains small and offers plenty of room for expansion.

Since his ascend in 2018 the designer has carefully crafted a contemporary vision of the Dior man one collection at a time. His unapologetic use of colour, unprecedented experimentation with materials and impeccable approach to construction delivered both a story as a part of a legacy, and sales; increasing the brands demand for leather goods alone by 20%. “Virgil is incredibly good at creating bridges between the classic and the zeitgeist of the moment,” said Michael Burke, chief executive of Louis Vuitton. At just 37 its easy to see how the designer uses his own public image as a globe – trotting DJ and a glossy line up of celebrities to fill the front seats of his shows to recontextualise the familiar giving it a new aura of cultural currency. 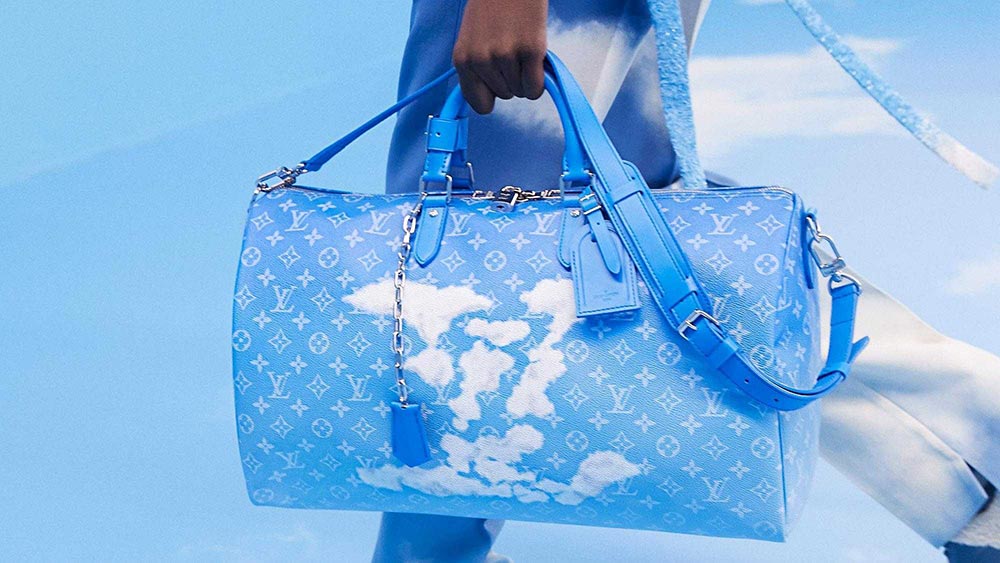 Louis Vuitton’s 2020 fall\winter menswear collection may arguably be the designers most memorable work to date.The collection looks at the evolving anthropology of the suit and the reprogramming of traditional dress codes, an approach which is evident in his philosophy from the start of his era at LV, telling the New York times “The first thing I am going to do is define new codes. My muse has always been what people actually wear, and I am really excited to make a luxury version of that”. He repositions the tapered silhouette and suit tailoring shifting away from emblems of convention, trade and success to a fresh lighter take on shirting and suiting adopted by younger men. Utilising a palette of soft blues and light greys, adorned with cotton clouds in a dream like environment where linear time ceases to exist and thus we have the descent of “Heaven on Earth”.

The designer uses surrealism to juxtapose our age influenced comprehension of the mundane traditions we take for granted, broken clocks engineered to spin backwards, are still right twice a day, the ceiling becomes an infinite sky, the suit, a symbol of corporate routine becomes a metaphor for creation and expression. As part of the set, traditional tools of the artisan are amplified into large scale sculptures inviting us to revisit our comprehension of reality through a child’s gaze, a refreshingly necessary sense of optimistic naivety to accompany the start of a new decade.