To celebrate 4/20 BAIT has released a 3-piece collection paying tribute to the pair of metalheads you know as Beavis and Butthead.

BAIT is a well-known streetwear retail store based in the United States. It was founded by Eric Cheng and the first store opened back in 2013. They sell their own in-house apparel including a wide selection of trainers and streetwear. BAIT often collaborates on projects with famous TV cartoons to create a clothing collection. Some popular collections have included Snoopy, Rick and Morty and multiple collaborations with Astro Boy. And now to add to this list of popular cartoons, they have just released their newest collection with 90’s ‘stars’ Beavis and Butthead.

Beavis and Butthead originally aired in 1993 and ran for seven seasons until 1997. The socially awkward, metal-loving teenage duo were created by Mike Judge. The episodes largely consisted of them doing something stupid that would result in someone getting hurt, however this was part of the appeal and the MTV audience loved everything about them. The love people had for the show led to a fandom being born which resulted in lots of merchandise being designed and sold. Everything was created, from video games to an album, action figures and of course clothing. 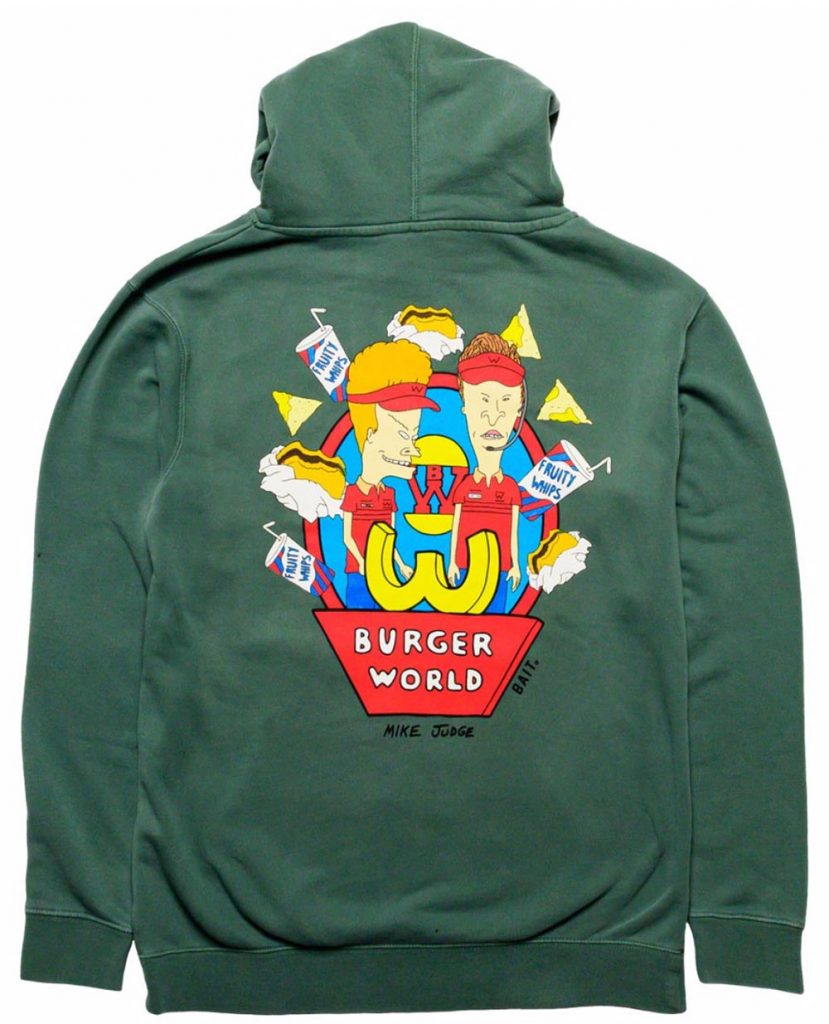 The BAIT collection includes 2 t-shirts retailing at $32 and a hoodie for $72. Both the white tee and the forest green hoodie are printed with colourful, vibrant images of the duo and the Burger World logo, which is a memorable location of where the boys worked. The second tee is slightly more playful. It has been tie-dyed with neon green, yellow and purple, Beavis and Butthead are also printed on the front with an image of two aliens on the back.

The collection with BAIT, isn’t the first time Beavis and Butthead have infiltrated the streetwear market. In 2018 Adidas paid homage to the iconic pair with a skate shoe and various apparel; and in 2019 Adidas teamed up with them once again. The centrepiece of the 2018 collection was the skate shoes that had a graphic print all over, which was inspired by the fictional employer of Beavis and Butthead – Burger World. The 2019 collection had more graphic prints, this time showing the duo alongside their rat friend who is recognisable from the series. If you missed out on the Adidas collections and you’re in need of your Beavis and Butthead fix, then the BAIT collection is perfect for you. 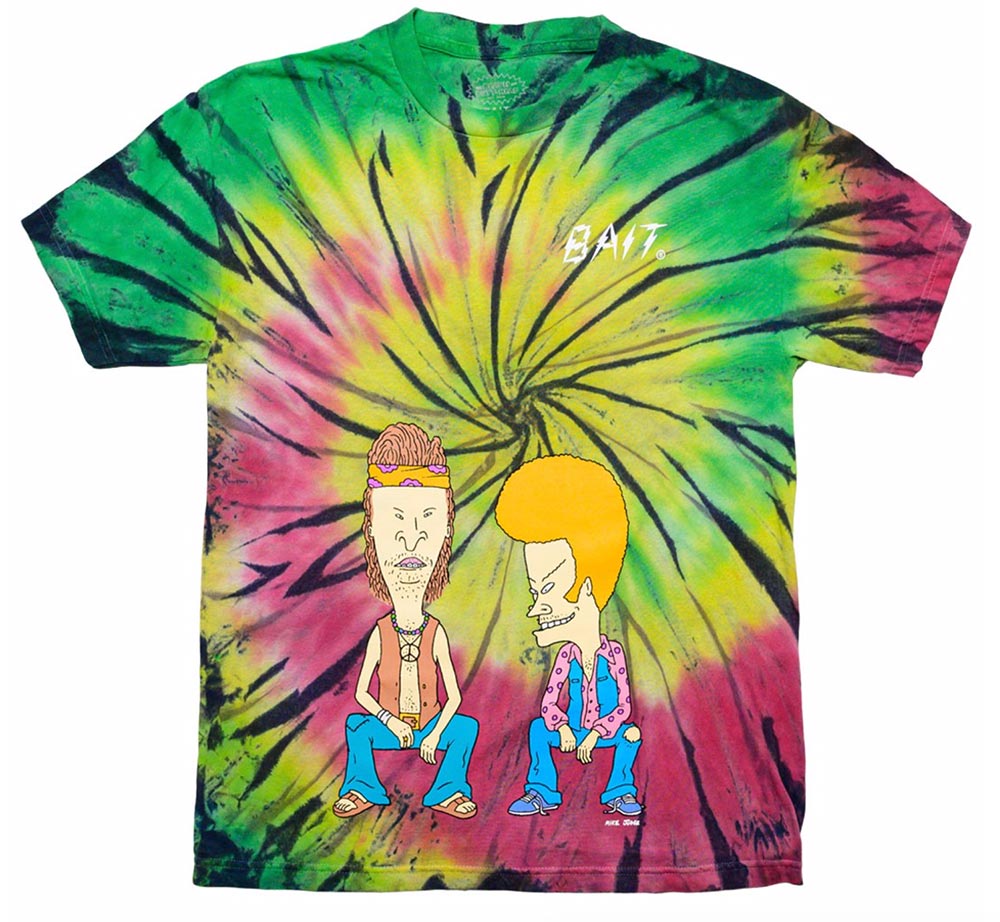 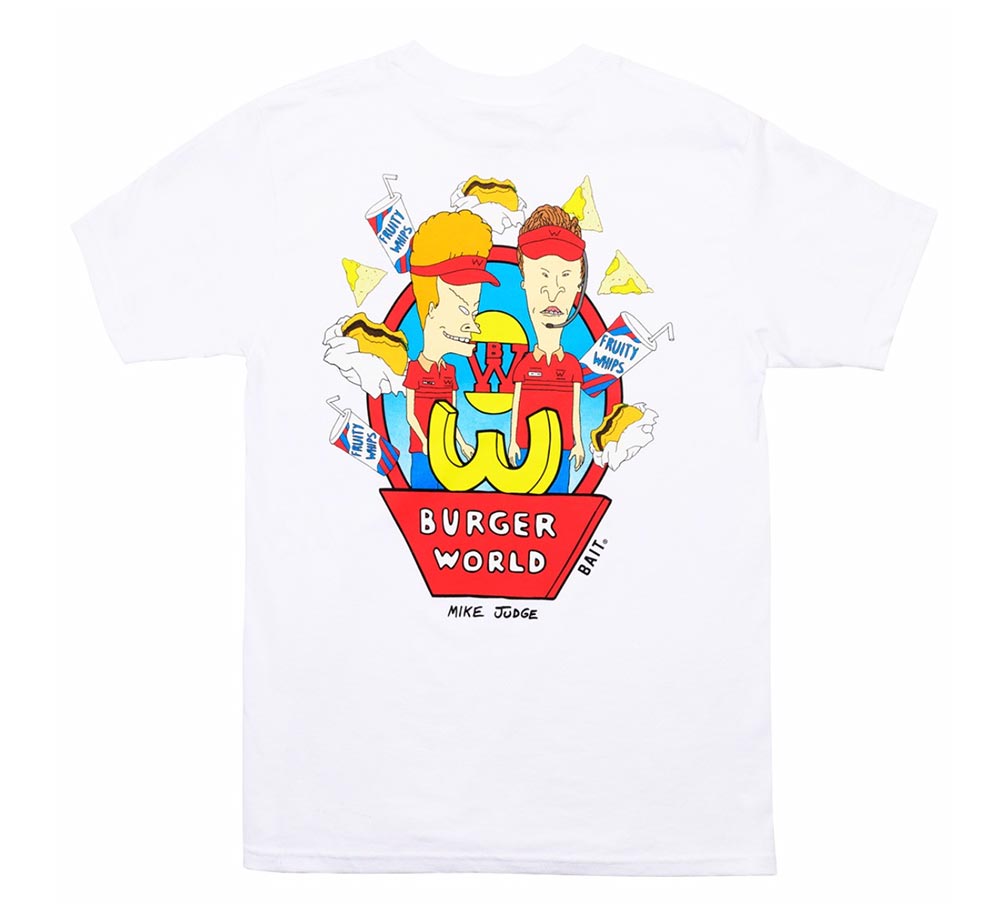 If you opt for the white t shirt showing Beavis and Butthead at Burger World then pair it with some casual black joggers such as these Y 3 track pants for an athleisure style. View Y3 Track Pants Black

If the tie-dye tee is more your style then you only need a block colour on the bottom as the t shirt is so vibrant. Opt for these black cracked joggers from Religion. They appear to have been subtly tie-dyed so these two pieces together creates a statement look, paying all types of tribute to the 90’s. View Cracked joggers

And if you manage to get the dark green hoodie then pair with these Jaded London pinstripe cargos. They are a cool, edgy alternative to plain black trousers and with the oversized hoodie, it’s a simple outfit whilst still looking put together. View Jaded London tailored cargo trousers in black pinstripe with chain